Important Notices ACWD's Customer Self-Service System will be unavailable December 2 - 7, due to a system upgrade. Read On...

As of November 2022, Members of ACWD's Board of Directors are Elected Based on Voting District Wards (also known as "Districts" or "Zones") 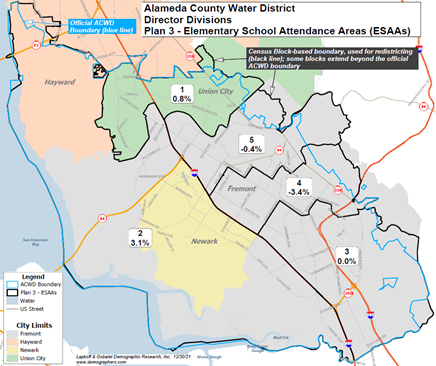 The Alameda County Water District Board of Directors transitioned from at-large to ward-based elections in 2022. Voters within the ACWD service area now elect their representatives on the ACWD Board based on which ward they are in, and voters only elect one representative for their ward.

The Alameda County Water District Board of Directors has completed the transition from at-large to ward-based elections. Prior to this process, the Board of Directors was elected using an at-large elections system, which means voters of the entire District elected the five Board members. A ward-based election is one in which the District is geographically divided into separate wards, each with one Board member who resides in the ward and is chosen by the voters in that particular ward   Directors serve four-year staggered terms and are elected in even-numbered years.

The District received a letter from a law firm alleging that the District’s current at-large elections violate the California Voting Rights Act (CVRA) (Elections Code §§ 14025-14032).  The CVRA prohibits the use of at-large elections if doing so impairs the ability of a protected class to elect candidates of its choice or to influence the outcome of an election.  Numerous public agencies, including the District, have been contacted by private law firms alleging violations of the CVRA in a push to move agencies to ward-based (also known as "district" or "zone-based") election systems.  The District does not agree with these allegations with respect to elections of the District’s Board of Directors.  However, the Board desires that its members represent the interests and wishes of all residents within the jurisdiction of the District, and that the community have confidence that the Board continues to represent the interests and wishes of the District.  Therefore, on August 12, 2021, the Board adopted Resolution No. 21-050 declaring its intention to change from at-large to ward-based elections.

Community input and 2020 census data was used to determine how wards should be drawn.   To assist with the transition, the District hired Lapkoff & Gobalet Demographic Research, Inc. (Lapkoff and Gobalet), a firm that specializes in drawing election ward boundaries for jurisdictions, also known as “districting.”

Many factors may be considered in developing the wards and draft maps.  Population equality is of primary importance, followed by the Federal Voting Rights Act’s prohibition of voting practices and procedures that discriminate on the basis of race, color or membership in a language minority group. Additionally, other factors include:

The District emphasized public input throughout the transition process.  The District conducted five duly noticed public hearings over two phases to review the process of converting to a ward-based election system, receive input from the public on communities of interest within the District’s service area, and review and receive public input on draft voting district ward maps:

On October 14, 2021, and October 28, 2021, the District conducted duly noticed public hearings to describe the transition process and solicit public input on communities of interest and other factors that should be considered in the development of draft voting district ward maps.  Lapkoff and Gobalet considered such input, together with the most current federal census data, in the development of five draft voting district ward maps which were published and posted on the District’s website on January 3, 2022.

On January 13, 2022, the District conducted a third duly noticed public hearing to present the five draft voting district ward maps and receive input from the public and from the Board.  Based on input received during this public hearing, two of the draft maps (Plan numbers 4 and 5) were removed from further consideration.

On February 17, 2022, the District conducted a fourth duly noticed public hearing to present the three remaining draft voting district ward maps and receive further input from the public and from the Board.  At this public hearing, Lapkoff and Gobalet provided additional details regarding the differences among the three draft maps, and the sequence of elections was discussed. 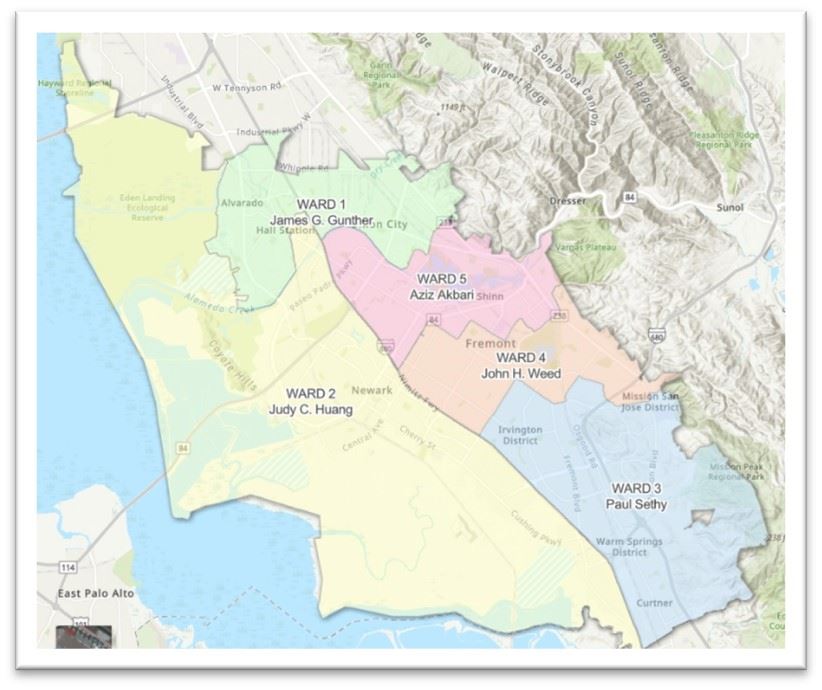 Important Note Regarding Maps and Documents

"Voting district," "zone," and "ward" mean the same thing when appearing on maps, documents, and videos on this website. These terms all used  to describe the distinct geographical area from which voters elect their ACWD representative.

During the transition process the terms "voting district" and "zone" were used to describe these areas. However, because the Alameda County Registrar of Voters prefers the term "ward," customer communications and interactive maps use this term to align with County election materials and related documents and processes.

Documents and materials associated with the process of transitioning from at-large to ward-based elections are provided below.  See important note above for how the terms "district," "zone," and "ward" are used interchangeably.